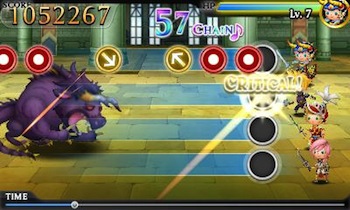 Theatrhythm Final Fantasy gets multiplayer in the sequel, but mostly sounds like more rhythm role-playing.

Theatrhythm Final Fantasy: Curtain Call, a sequel to last year's Final Fantasy-themed music game for the 3DS, was unveiled in the latest issue of Japan's Jump magazine. Like the original Theatrhythm, Curtain Call will be a 3DS exclusive.

According to the article, as translated by Gematsu, Curtain Call will boast over 200 tracks, including songs from Final Fantasy IV and Lightning: Final Fantasy XIII, and 60 characters from the series. Curtain Call's biggest improvement comes in the form of a new "Versus Battle Mode," allowing players to square off in musically-guided combat.

Since the game has yet to be formally announced by publisher Square Enix, there's no word on whether Curtain Call will come stateside. Considering the Final Fantasy pedigree, a western release seems like a relatively safe bet.