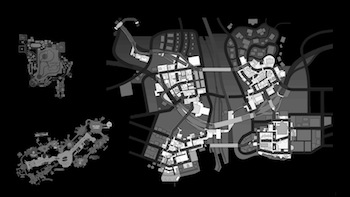 I hope you're ready for a lot more Dead Rising, folks.

Dead Rising 3 is going to be a much larger game than its predecessors, based on the size of its world map. Speaking with the Financial Post, technical art director Liam Gilbride says DR3 will let players loose on an open world larger than Dead Rising and Dead Rising 2 put together.

An Xbox One launch title, Gilbride says that working with next-gen hardware has allowed developer Capcom Vancouver to take the next logical step in the evolution of the Dead Rising series, creating a truly open world. The team expects that players will use vehicles to travel at least 50 percent of time, given the size of the map.

"We wanted to go truly open-world this time around," says Gilbride. "No more load screens, with the biggest world we've ever been able to make, with loads of zombies."

Both Dead Rising and Dead Rising 2 used an open world-style structure, stringing together large, connected areas fostering non-linear gameplay. That approach led to long load times when moving from one area to the other. Gilbride says that eliminating that particular nuisance is a high priority for Dead Rising 3:

"We made that decision early on. So that became a big part of our decision making process," says Gilbride. "We kept have to ask 'How can we make this seamless?' while still getting all of the data that we needed to get in ... But it really hurt the user experience in DR2, hitting that load screen over and over and we wanted the world to feel bigger."

Dead Rising 3 will launch alongside the Xbox One November 22.