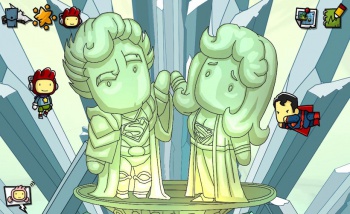 With entire libraries worth of characters and objects to draw from, Scribblenauts is arguably one of the most imaginative franchises in gaming. Regardless, it's not uncommon for players to continuously spawn the same invincible creature to solve every single puzzle. That's an issue 5th Cell hopes to address in Scribblenauts Unmasked, which is no easy task for a game featuring 14 versions of Superman. What can a developer do to keep things fresh? According to 5th Cell, procedurally generating Scribblenauts Unmasked's puzzles, which keeps players on their toes while forcing them to think up creative solutions.

"Superman isn't going to solve all your problems," said executive producer Kirsten Gavoni. "He'll be useful in certain areas ... but he's not necessarily going to do all of your bidding and deliveries and [creation of] different diversions for people. The puzzles are randomized enough that you're going to need to use different types of objects in order to solve them."

Scribblenauts Unmasked takes place in various realms scattered across decades of DC Comics history. Puzzles are then procedurally generated within the realm's given parameters, which unfold based on how specific heroes and villains would interact with each other. For example, players who rely on Superman might find themselves barred by a kryptonite-wielding Lex Luthor, or by Poison Ivy's mind-controlling toxins. (Don't call shenanigans. That actually happened.)

Even if it's not enough to prevent players from solving 90% of puzzles a specific way, the reputation points system will encourage you to occasionally try something new. "We don't want to limit people and say, 'No, you used Superman too many times; you can't use him again,'" Gavoni explained. "But what we do do is, if you continually use the same creatures over and over again, or the same objects over and over again, you don't get as many reputation points for doing so."

In other words, if you've used Superman for five puzzles, next time mix it up and use Blue Beetle instead. As long as he doesn't run into a procedurally-generated Doomsday, it'll probably be fine.