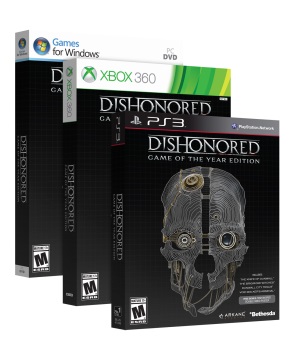 The Dishonored: Game of the Year Edition pulls all the elements of Arkane's award-winning murderfest into one slick package.

If you somehow managed to miss out on Dishonored but still have at least a passing interest in giving it a go, this might be just the thing. Dishonored: Game of the Year Edition includes the original game - which as you may have heard is pretty good - plus all the DLC: Dunwall City Trials and Void Walker's Arsenal, and the more interesting Knife of Dunwall and Brigmore Witches, which returns to a story-driven experience by casting you in the role of the legendary assassin Daud.

Dishonored: Game of the Year Edition launches in North America on October 8 and hits Europe on October 11.