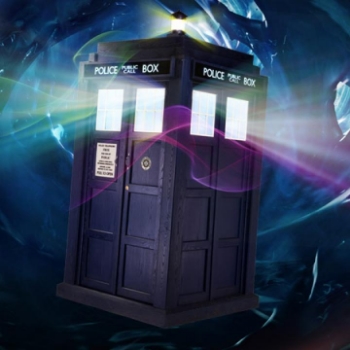 In a speech at the British Science Festival, physics superstar Professor Brian Cox talks about building the blue phone box.

Time travel is one of the many holy grails of physics, along with anti-gravity, harnessing fusion power and making the perfect soufflé. But the exact fundamentals of how one would easily achieve such a feat has long eluded physicists. Speculation on how to go about achieving time travel has often dipped into science-fiction for potential avenues to explore. What more iconic a place to start than the Doctor's beloved blue box?

As a fan of the TV show himself, Professor Brian Cox has tried to outline the fundamental physics behind how the Tardis ferries the Doctor around the universe, also addressing the famous party piece of it being bigger on the inside. "Can you build a time machine?" said Professor Cox. "The answer is yes." But after luring us in with such promise, the asterisk of clarification loomed as he revealed a rather problematic design flaw. You can travel into the future, but you can't come back.

Thanks to the work done by Einstein, under General Relativity, for someone to travel 'forward' in time from their perspective, they need to be put in a ship and accelerated to speeds nearing the speed of light, the faster the better. This would cause time to pass faster around the ship. Whereas inside, time would pass at the normal rate. Once the ship comes to rest, someone can emerge years into the future from the time when they left where only moments have passed on board. Professor Cox notes this has already been done at CERN where protons have been accelerated to such speeds. Now the challenge is finding the even greater amounts of energy required to do the same, but to a phone box. He also briefly touches on other methods of time travel including wormholes - short cuts through the fabric of space and time. However, those are even further out of our reach.

As for making the Tardis smaller on the outside, the Professor says: "We look for extra dimensions at the LHC (Large Hadron Collider). You can imagine extra dimensions in space, and that we are living on a sheet of higher dimensional space." Whether this is the explanation for one of the Tardis' most famous features is yet to be seen. Cox is set to present a show on Dr Who airing November 23rd dealing with alien life, different dimensions and time travel. Maybe we will learn the answer then!

Although it is a very problematic method of time travel, it is none the less a step in the right direction. Combining a ship that is bigger on the inside with speeds approaching that of light could build a Tardis-like time machine. Some people might make the trip on the basis that in the future, we have figured out how to 'properly' time travel and will be able to get back home!

Finally, a note to anyone interested: The annual time travellers convention will take place last Tuesday!