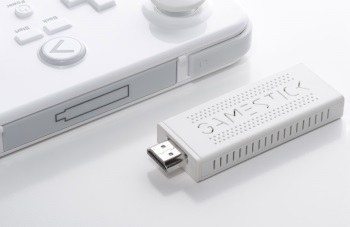 The Android-powered Gamestick is now scheduled to hit retailers on October 29.

GameStick, the second Android-powered game console to find success on Kickstarter, has already suffered through a couple of delays. It was most recently slated to come out on September 30, but today the company announced that's not going to happen, but that it will - for really and for sure - hit retailers on October 29.

"While to myself and the team at PlayJam the journey seems longer, we have in fact come a significant way in a very short period of time with GameStick," PlayJam CEO Jasper Smith said in a statement. "The challenge of bringing affordable gaming to the big screen has always sat at the heart of everything we do and GameStick represents a huge step forward in reaching that goal. We're extremely proud of what we have achieved and look forward to families getting their hands on devices in the run up to Christmas."

The October 29 launch date is global but limited to retailers GameStop, GAME and Amazon, meaning that if you happen to live in a region outside of their footprints, you'll have to wait. PlayJam said "additional outlets" in Canada, Europe and the Middle East will have the device in stock prior to the end of the holiday season.

Backers, meanwhile, are being told that they will receive their units ahead of the retail release, as promised; in the comments section on Kickstarter, the GameStick team said it hoped to have them in the hands of backers by mid-October. "We're doing everything we can to mitigate customs delays etc by clearing in bulk to the UK and US," it wrote. "On single units or the packs of 10 that we get for testing purposes, this generally takes between 4 & 5 days to reach us from China. We then have the individual onward shipments which should be smooth - at a guess 3 days. That's what we're hoping."