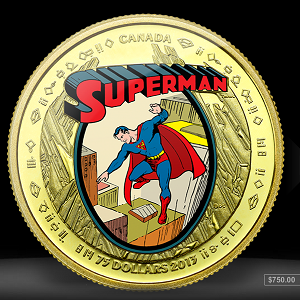 The Canadian Royal Mint has created a limited edition coin set to celebrate the Man of Steel.

While Superman for a long time worked under the mantra of "truth, justice and the American way," the iconic hero still has a wide fanbase in countries around the world, including the United States' neighbor to the north. That in mind, to celebrate the 75th anniversary of Superman's comic book debut, the Canadian Mint has released a series of collectible coins to commemorate the character.

The set, which contains seven coins in total, does a fair job of representing Superman throughout the breadth of his long career. While some focus in on newer versions of the comic hero, others pay homage to the character's early days. All in all, it's a neat little set that would be a nice acquisition for Superman fans.

Then again, even buying a few of these custom coins could prove too pricey for even the most dedicated devotee. While the cheapest entry in the set isn't too unreasonable ($29.75 CAD), the rest are more expensive with several topping one hundred dollars. The cream of the crop is a spiffy 14-carat gold coin that costs a whopping $750. Only 2000 of those are being made which, in addition to its considerable price, could arguably make it quite the collector's item. Buying the entire set as a whole, in turn, will run you more than $1250. Personally, as nifty as these coins are, I might just save my money for actual comic books.

Note: It's been pointed out by some that Joe Shuster, the co-creator of Superman was actually half-Canadian, giving a more specific reason for the country to celebrate the character's anniversary.