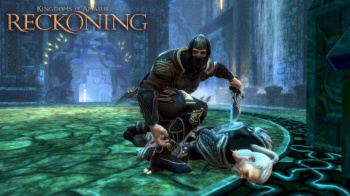 Developers will have the chance to loot the partially completed MMO "Project Copernicus" off the body of 38 Studios as Rhode Island attempts to recoup $90 million of lost taxpayer money.

Diehard fans of 2012 RPG Kingdoms of Amalur: Reckoning might want to pool their money together later this month when the state of Rhode Island puts the IP for that series up for sale. The main piece of loot in that haul is "Project Copernicus," the MMO that developer 38 Studios was basing off the newly-created Amalur property before the company closed in May of 2012.

Once thought to be the start of a major new franchise, Reckoning instead put the state of Rhode Island on the line for $90 million. 38 Studios received millions of dollars in loans to move to Rhode Island, before the company eventually declared bankruptcy. The state became the owners of the Amalur property after 38 Studios couldn't pay back its investment.

However, how valuable Amalur and "Project Copernicus" will be is debatable. Joystiq's News Editor Alexander Sliwinski was asked by a Rhode Island news station to weigh in on the matter, and it was not a rosy forecast. "If someone is thinking that Rhode Island is going to sell this for millions and millions of dollars, I would have a very difficult time believing that," he said, citing the industry's current risk-aversion to MMOs.

Land said he expected to have a date for the auction established later this week. He declined to say how much he expected the Amalur IP to go for, but did say there were interested parties.