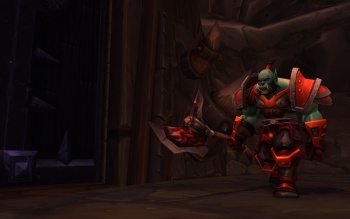 An analysis of 120,000 World of Warcraft player names across multiple realms reveals how creatively dead we all are.

Researchers Christian Thurau and Anders Drachen at the Copenhagen Business School have published an in-depth analysis of 120,000 World of Warcraft player names in order to help establish how players identify themselves online.

If you think you've seen an inordinate amount of Blood Elves named some variation of "Sephiroth," don't worry, you're not going crazy, as the name is one of the most popular on EU realms. When we get down to specific races and classes, we see that "Arthas" is the most popular name for Human characters, while the druids of World of Warcraft officially win the "creativity of a rock" award, as the most popular druid player name is simply "druid".

Overall, "Nemesis" is the most popular name for players on EU realms, while US players prefer "Athena". Other names in the top ten include "Death", "Nightmare", "Pain", and "Chaos". If you're thinking that these all sound pretty macabre, you'd be right, as Thurau and Drachen discovered that "negative" names outnumbered "positive" names six-to-one.

Other data discovered by the pair was that RP servers were more likely to have unique player names, while US realms were proven to be ever so slightly more creative than EU counterparts, containing a slightly higher percentage of unique names. There also seems to be a separation in character names between the more human-like (Human, Blood Elf, Night Elf, Draenei) and less human-like ("bestial")/human-proportioned (Troll, Undead, Orc, Tauren, Dwarf, Gnome) races.

To prove that the internet just won't let a joke die, Thurau and Drachen discovered 131 counts of some variation on "Chuck Norris". *sigh*.