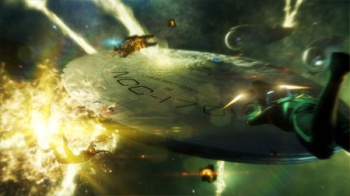 It might even have hurt the movie, Abrams says.

"The last game, which was obviously a big disappointment to me," says J.J. Abrams in a GamerHub interview about Star Trek: Into Darkness, "I feel, for me, emotionally it hurt." It got bludgeoned by the critics and, Abrams feels, "arguably hurt" the movie's chances at the box office. Whether or not you follow Abrams down that rabbit hole is up to you - the movie had plenty of problems that had nothing to do with the game tie-in - but the video game did the series no favors, and Abrams didn't appreciate being tagged with its awfulness just as all the work on the movie was about to pay off.

That doesn't mean Abrams has given up on games, as part of the Star Trek franchise. He accepts that games based on movies don't often work, but thinks that there is a solution. He's in talks with Valve, in hope that - in spite of the awfulness of the Star Trek game - there's a way past that disaster, to something better. "Starting from scratch," says Abrams, "let's make this, from the ground up, great, regardless of what's come before." Anything that's based on something else needs to be able to stand on its own merits, Abrams feels, and maybe Valve is the company best suited to achieve that. As to what that collaboration may result in, Abrams isn't about to say, beyond dropping brief Portal and Half Life movie hints.

Abrams feels there's a lot of potential cross-over between movies and games. Tomb Raider, Uncharted and similar action titles blow him away, with their cinematic vision. "You watch the beginning of Uncharted 3," he says, "you're watching it, as amazed as you would be in any movie, and then you're like 'oh! I'm in this thing!'" He'd love to see more of that cross-influence take hold, but without the whole "ancillary product" marketing ploy thing that ruined Star Trek.