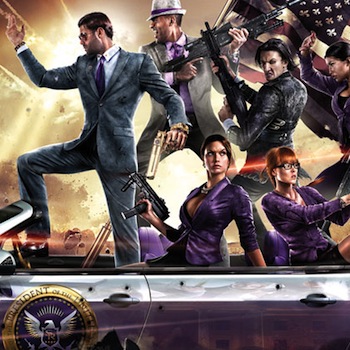 Who needs GTA V when you can get "GATV?"

Saints Row 4 publisher Deep Silver doesn't want you to forget about their game when Grand Theft Auto V hits stores on Tuesday, and they've got a plan to keep you from fleeing Steelport for Los Santos: Selling you new clothes and guns! That's right, according to this week's PlayStation Blogcast, there are not one, but two new SR4 DLC packs rolling out next week: The "GATV" pack and the "Wild West" pack.

Never one to shy away from conflict, the anagram-tastic "GATV" pack is all about... Being more like everyone's favorite character, Johnny Gat. According to images leaked on the GameFAQs forums, the pack will include Gat's clothes, hair, and something called a "knifegun." It isn't exactly clear what will be in the "Wild West" pack, but the safe bet would be a set of Old West-style outfits.

While the podcast only confirms that the packs are coming to PS3 next week, it seems likely that they will be available on PC and Xbox 360 around the same time.