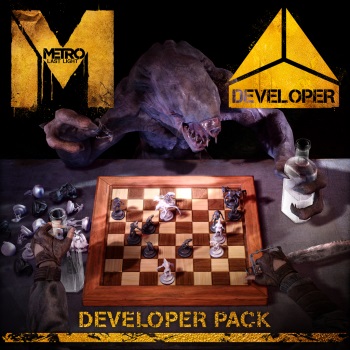 The Metro: Last Light "Developer Pack" DLC promises an intense survival-horror-style adventure plus a series of "test levels" that offer up-close looks at the game's weapons and characters.

The Metro: Last Light "Developer Pack" is something of a strange beast. On one side of the coin you've got "Spider's Lair," a single-player mission set in an abandoned missile silo that's been overrun by spiders. You remember those Metro spiders, don't you? Yeesh. 4A says the level is designed to be "one of the most intense, stressful Metro experiences ever," which sounds promising.

The good news is that you'll be equipped with a new weapon ideal for dealing with giant, tightly-packed, mutant spider webs: a hand-pumped flamethrower! The bad news is, well, Metro spiders. Yee-hee-heesh.

The other part of the DLC is more a set of tools than an actual mission. It's a reworking of some of the features of the test level the developers used while making the game: the Gun Table, a shooting range with all of the game's weapons in every possible configuration and a series of "marksman challenges," the AI Arena, in which you can pit groups of enemies against one another to study their AI modeling and behavior (and take part in other challenges) and the Museum, where you can take an up-close-and-personal look at the game's mutants and characters.

The Developer Pack also includes a brand new weapon which the developers claim has its own "incredible story" that it will share with the world next week.

So there you have it. I'm not sure I'd get much out of the test levels, but the Spider's Lair sounds like a lot of fun. The Metro: Last Light "Developer Pack" DLC launches on September 17 (September 18 on the PlayStation Network outside of North America) for $3.99/£3.19/€3.99.