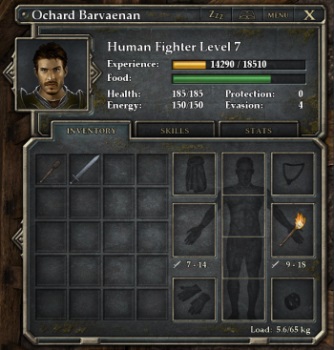 Legend of Grimrock 2 will sport an improved interface that makes character management and combat easier and more efficient.

The original Legend of Grimrock user interface was actually pretty good, and die-hard fans of the game (and old-school dungeon crawls in general) need not worry that the whole thing is being dramatically overhauled: it's not. It is, however, being tweaked and tuned a bit for Legend of Grimrock 2, both to improve on areas of weakness and to accommodate some of the changes in the sequel.

Looking at the image of the changed interface, it's clear that Almost Human hasn't reinvented the wheel, but there are some notable usability tweaks. Players will be able to cycle through the characters in their party using the arrows on either side of the portrait, and all important character information - stats, experience, food, health, energy, protection and evasion - will always be visible on the upper half of the character sheet.

Visually, little bits of color make the UI more appropriate for the sequel's outdoor environments, and race and gender-specific inventory background panels (by which I assume they mean the paper dolls) have also been added. Harmful and beneficial "conditions" will be indicated in the character portrait in the new game, so players won't have to pop into the stats tab to find out what's afflicting them.

Finally, the attack interface has been changed up to make the mechanical aspects of combat a little less trying. "We have also redesigned the attack frames so that the rune panel fits on the screen without hiding the little portrait and health and energy bars. It's a lot cleaner now, especially with multiple mages," the team wrote. "As a side effect the attack buttons are now a little bigger making it easier to hit them in the heat of battle."

It looks like positive changes all around - improving on the original without taking away from its character or dedication to the look and feel of the old-time RPGs upon which it's based. Do you approve?