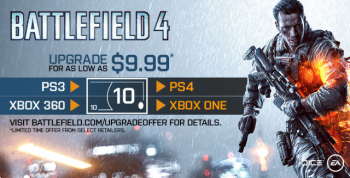 Players will be able to upgrade from PS3/Xbox 360 versions of the game to PS4/Xbox One versions for as little as $10.

Those of you itching to get your hands on Battlefield 4 won't have to wait too much longer, as EA has announced that the game's open beta will kick off on October 1. While not explicitly mentioned, it can be assumed that the exclusive beta, which is only for players who pre-ordered Battlefield 4 or purchased Battlefield 3: Premium, should be available at the same time.

Furthermore, DICE also announced a scheme that would let early adopters on current-gen systems (PS3, Xbox 360) upgrade to their respective next-gen versions (PS4, Xbox One) of the game for as little as $10. Inside marked copies of Battlefield 4 for PlayStation 3 there will be a voucher with a unique code printed on it. This code will allow you the one-time opportunity until March 28, 2014 to purchase a digital version of Battlefield 4 for the PS4 via the PlayStation Store for only $9.99.

For the Xbox 360 version, you'll have to rely on the list of participating retailers which are offering the $10 upgrade deal upon trading in your current-gen title.

DICE previously revealed a system that would allow users to carry over their multiplayer stats when upgrading to a next-gen version of the game.