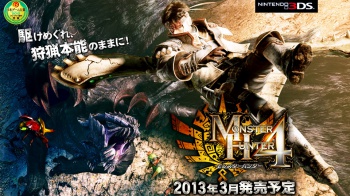 A feat made more impressive when you consider Monster Hunter 4 has only been released in Japan.

The Japanese publisher claims that a local development that features a link with Shibu hot spring resort in Nagano Prefecture as well as positive and wide-ranging collaborations with other industries in areas such as food, drinks, and clothing helped contribute to Monster Hunter 4's success.

It aims to continue to expand its Monster Hunter promotion in Japan, with future events such as the "Monster Hunter Festa' 13", which is being staged in 5 cities across Japan, and "Monster Hunter the Real 2014" (a Monster Hunter-themed version of the "Resident Evil: The Real we saw a few months ago), at Universal Studios Japan.

Capcom neglected to offer any word of an English release of Monster Hunter 4, but given the series' popularity, it should only be a matter of time before it hits the West.