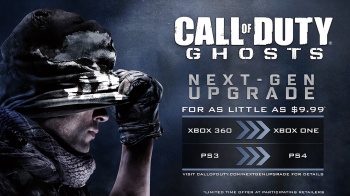 If you purchase Call of Duty: Ghosts for 360/PS3 from the Xbox or PlayStation digital store, you can upgrade to the Xbox One/PS4 version for just $10.

Not to be outdone by its modern military shooter competitor, Activision has also announced a "Next-Gen Upgrade Scheme" for Call of Duty: Ghosts. The basic gist of it is, if you simply can't wait until November for your CoD fix, you can pick up a copy of Call of Duty: Ghosts for your Xbox 360 or PS3, and later upgrade to an Xbox One or PS4 version for as little as $10.

Unlike Battlefield 4, this time it looks like both Microsoft and Sony's digital marketplaces will be participating in the deal. If you purchase a digital copy of the game from the Xbox Live Marketplace, you can choose to either pay $69.99 right then and there for a "dual licence" of the game (giving you a code for both the 360 and Xbox One version), or pay $59.99 for the 360 version and upgrade to the Xbox One version later for $10.

For the PlayStation version, buying the PS3 version from the PlayStation store entitles you to purchase a PS4 version for just $10. Additionally, specially marked retail copies of the PS3 game will have a redeemable $10 discount coupon code for the PS4 version.

It's worth noting that both of these offers have an expiry date: March 31st, 2014.

If you're a brick-and-mortar kind of guy, Activision has also released a list of participating retailers that are offering the $10 upgrade deal upon trading in your current-gen version of the game.

Upgrading from current-gen to next-gen carries over all of your multiplayer stats and singleplayer saves, as well as any DLC you may have purchased (including the season pass) completely free-of-charge.