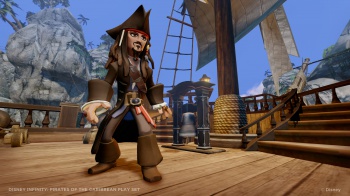 It's a strong start for Disney's latest game gamble.

"We're very pleased with the launch in both the U.S. and globally," a Disney spokesperson beams, "and believe Disney Infinity is well-positioned for the critical holiday sales season." At 294,000 units sold within the first two weeks, Disney has every reason to be pleased, but this is the Games Division's Hail Mary pass. The Division blew through $54 million in the last financial year and $70 million the year before that; Disney Infinity is the Division's sole bright spark, at the moment.

It's a spark that, according to the Wall Street Journal, cost Disney $100 million to make. "If Infinity does well, it bodes very well for the bottom line of this unit," Robert Iger is reported to have said, in a February meeting with analysts. "If it doesn't do well, the opposite will be the case." The Division took a big hit with Epic Mickey, and if Infinity had tanked its future would have been bleak. But fortune favored it; only Madden NFL 25 and Saints Row IV outsold Infinity in August.

Christmas is coming, and Skylanders is looking fat. Disney Interactive will need to do well to beat out the established competition, but - so far - consumers are putting their pennies in Mickey's hat. If this sales trend continues, Disney's Games Division will have something to celebrate in the new year.