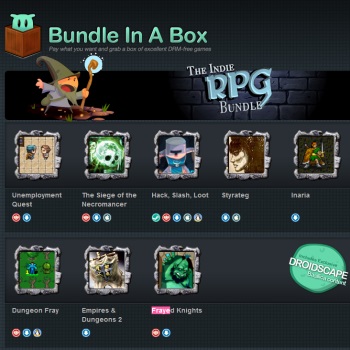 The Indie RPG Bundle in a Box is big, cheap and very, very indie.

There are lots of game bundles to choose from these days, and while those that offer well-known, popular titles on the cheap tend to get all the attention, the Indie RPG Bundle in a Box is just too darn big to ignore. It's not quite pay-what-you-want, but the minimum price is $1.99 and honestly, if you're not willing to spend two bucks on this thing then it's probably not for you anyway.

So, for a couple bucks or more, you get Unemployment Quest, The Siege of the Necromancer, Hack Slash Loot, Styrateg, Inaria, Dungeon Fray, Empires & Dungeons 2 and Frayed Knights. The games are offered as DRM-free downloads or through Steam or Desura as available (a couple even have Mac and Linux versions) and a portion of the proceeds go to charity: Five percent of all funds raised is earmarked for the Hellenic Center for Mental Health and Treatment of Child and Family, also known as To Perivolaki (The Little Garden), and for every 100 bundles sold, $15 will be added to the Indie Dev Grant, which will be given to a developer chosen by Bundle in a Box buyers after the sale concludes.

As is the norm for game bundles these days, those who pay more than the average - currently just shy of five bucks - will score a hefty pile of extras, too: CoC: The Wasted Land, The Wizard From Tarnath Tor, Northmark: Hour of the Wolf, The Wizard's Lair and Telepath RPG: Servants of God. There are also universal extras that will unlock for everyone if 1000 bundles are sold, which appears inevitable at this point, including soundtracks and art for various games and a strategy guide for Frayed Knights.

These aren't mainstream, major-league RPGs of the Dragon Age or Witcher variety, but if you're willing to put up with less-than-cutting-edge graphics and the occasional rough edge, you may well find some pretty amazing things inside; the sheer volume and variety of this bundle is such that RPG fans are almost certain to find at least a couple of games that ring their bell. The Indie RPG Bundle in a Box is live now and runs until October 1.

Source: Bundle in a Box