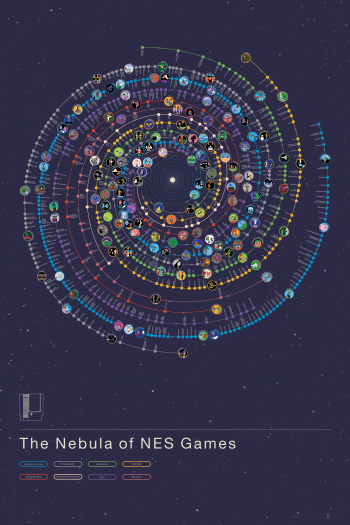 NES games from nearly a decade of classics have been conveniently organized into this impressively thorough poster.

The NES is arguably the progenitor of modern console gaming: from 1984 to 1993, the library of games released for Nintendo's breakout gaming system shaped what the industry would become. In tribute to these great classics, Pop Chart Lab has produced a sleek spiral timeline representing every single game to grace the NES, organized by genre and release date. From Super Mario Bros. at the center of the nebula to Monopoly on the far rim, you can find little pieces of gaming history all over this galactic infographic.

Pop Chart Lab produces stylish charts of all sorts of data, the NES library being one of its latest projects. Eight game genres each have a color-coded arm in the galaxy, with each game laid out by release date. Over a hundred illustrations dot the digital star system, highlighting memorable games like Final Fantasy and River City Ransom.

The "Nebula of NES Games" is available for pre-order as a 24-inch by 36-inch print. You can pick up the print itself for $32, or a handful of other presentation options up to a framed print for $142. All those orders will be signed by the artists and start shipping this Friday.