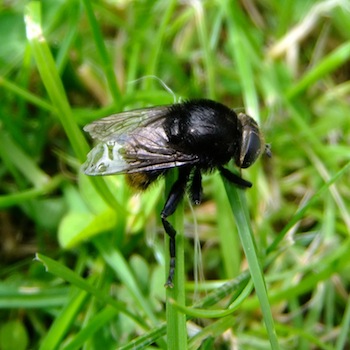 Research suggests smaller animals have a different perception of time.

When it comes to evading rolled up newspapers and swatting hands, flys have all the advantages. Their multifaceted eyes give them almost 360-degrees of awareness, while their shorter bodies mean their nervous system can react faster. Now, researchers in Ireland and the UK have discovered that smaller creatures might actually perceive time differently, according to their metabolic rate and body size. Effectively, it means that small flys and mosquitoes live in perpetual bullet time compared to us lumbering humans.

The researchers used flashing lights to measure how various animals perceived time. Animals were trained to behave differently according to the speed of the flashes, and experimented with various intensities and frequencies until they couldn't distinguish the difference. What they found was that to the best of our knowledge, creatures with a faster metabolic rate and a smaller body mass perceive time much faster than larger ones do.

The paper's authors suggest that this is an evolutionary response to an animal's environment. They even argue that both prey and predator animals have different methods of perceiving time, with some able to change it as needed. The findings certainly makes a lot of sense, but it's a bit jarring to realize just how much our perception of time can color our world.