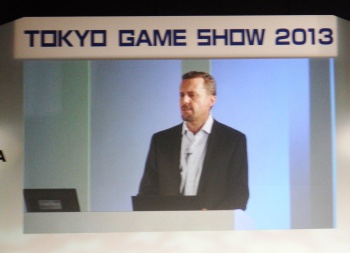 Speaking at Tokyo Game Show today during Sony's keynote presentation, Sony Computer Entertainment president Andrew House made some bold claims on just how successful the company's new console will be. In particular, he said that Sony is aiming to sell 5 million PS4s by the end of 2013, which when you consider that the console won't launch in Japan until 2014, is a pretty large estimate.

He said that the PS4 had been developed to be "consumer focused, developer inspired" and that he believed this is essential in helping address three growing "trends" in the gaming industry. The trends are, according to House: connectivity as a must-have factor, the rise of "second screen" devices, and a shift in purchasing to become more digital focused.

House says that 1.5 billion PSN accounts have been registered worldwide since the service's launch, and only expects that number to grow higher with the PS4. He said that the "potential of the PS4 is not limited to core users," and detailed plans of how the system will expand to capture the casual markets, in particular, with a focus on party games.

He also said that being flexible for indie developers is very important, and says that Sony will allow indies to publish whenever they want, and for whatever platform they want to publish on.

Edit: The English translation at the event was slightly off, but it appears that House was talking about the 2013 fiscal year, which ends in March 2014, after Japan's February 2014 launch.