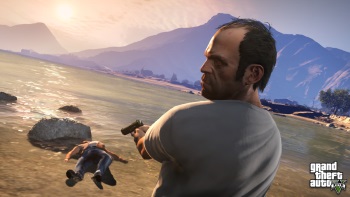 Grand Theft Auto V is coming under fire for a scene in which players torture a character by pulling his teeth and electrocuting him.

At some point over the course of Grand Theft Auto V, you will be compelled to aggressively question a character with implements including a sledgehammer and jumper cables, after which you'll deliver a brief lecture about how torture is merely a technique for exerting power. It's a segment that doesn't sit well with human rights groups Freedom From Torture and Amnesty International.

"Rockstar North has crossed a line by effectively forcing people to take on the role of a torturer and perform a series of unspeakable acts if they want to achieve success in the game," Freedom from Torture Chief Executive Keith Best told The Guardian. "Torture is a reality, not a game and glamorizing it in popular culture undoes the work of organizations like Freedom from Torture and survivor activists to campaign against it."

U.K. Labour MP and noted videogame critic Keith Vaz joined in the condemnation of the game, saying that he is "astonished at the level of violence depicted," while Association of Teachers and Lecturers President Alison Sherratt said that the graphics are so realistic, young children may not realize they're watching a game.

"Four to five-year-olds have a tendency to copy what they see on TV, whether it's this or Fireman Sam putting out fires," she said. "ATL is not calling for a ban on these games, or censorship at all. What we are asking is for parents to become aware that the little ones are seeing these things."

Of course, the little ones aren't meant to be seeing these things, and it's arguable that giving a guy the juice is hardly the worst thing you'll do in Grand Theft Auto V. But as Best pointed out, torture, unlike most of the other excesses depicted in GTA, is something that actually happens in real life.

"This adds insult to injury for survivors who are left physically and mentally scarred by torture in the real world," he said. "If Rockstar North's message is a satirical critique of the practice of torture, it's lost on us."