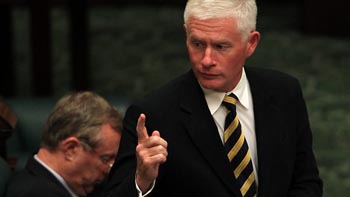 Ever since the introduction of the R18+ classification of games in Australia in January, South Australia's Attorney-General John Rau has had doubts about its effectiveness. Rau said more than a dozen videogames released in Australia had been given the MA15+ rating while they received higher age classifications in Europe and North America.

He pointed to Killer is Dead, Alien Rage, God Mode, and The Walking Dead, all of which received M-ratings from the ESRB and 18 from PEGI. Players in North America and Europe had to be at least 17 years old and 18 years old, respectively, whereas in Australia they only had to be 15 or older.

"It is concerning to me, particularly as a parent, when I see that 13 games have been released in Australia as MA15+ whilst exactly the same grade attracts up to a R18+ classification overseas," Rau said. However, he is satisfied with the R18+ rating for Grand Theft Auto V, which received similar age classification ratings from the ESRB and PEGI.