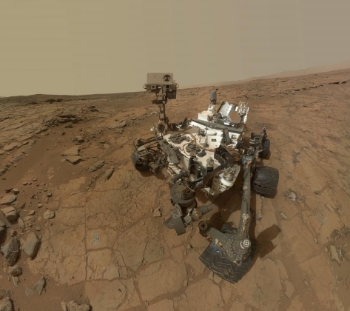 Results from the Mars rover fail to confirm methane levels, causing many to rethink the likelihood of finding living organisms on the Red Planet.

Curiosity has been trundling along the Martian surface for just over a year now and in that time the rover has studied a variety of objects, constantly beaming back fascinating scientific results. The job of ground based rovers is to get face to face with samples of an alien planet and serve as a remote laboratory for scientists back on Earth. The need for such close up observations has been demonstrated today by Curiosity's failure to confirm previous orbital observations of atmospheric methane concentrations. The news has caused some scientists to lose hope in finding anything alive on Mars.

Long before Curiosity's launch, telescopic and satellite observations of the Red Planet revealed pockets of atmosphere with high concentrations of methane at 10 parts per billion (ppbv). This gave scientists hope that there might be a chance of finding life on Mars, given that 95% of all atmospheric methane on Earth is produced by microbial organisms. However, Curiosity has been inhaling the Martian atmosphere since August 2012 and has not been able to detect a single trace of methane. This means that if there is any methane on Mars, it is at concentrations lower than the sensitivity of Curiosity's instruments, around 1.3ppbv. This would mean that just over 10,000 tonnes of the gas exists on Mars. Even being generous in balancing the numbers, the new estimates are six times lower than those based on previous observations. Curiosity's limitations as to where on the planet it can sample should not matter since the atmosphere on Mars is known mix well.

The news has caused NASA scientists to be less hopeful going forward in the search for life on Mars. "Based on previous measurements, we were expecting to go there and find 10ppbv or more, and we were excited about finding it. So when you go to search for something and you don't find it, there's a sense of disappointment," said Dr Chris Webster, the principal investigator on Curiosity's Tunable Laser Spectrometer (TLS). Microbial activity is not the only source of a planet's methane - comets or asteroids could have delivered the substance, or it could have been released by geological processes.

Hope still exists for finding life on Mars. Some scientists have speculated that if methane producing bugs (methanogens) do exist, they could be living deep underground, away from the harsh surface conditions. Yet other forms of life may still be thriving, Dr Webster goes on to say: "This observation doesn't rule out the possibility of current microbial activity, [but] it lowers the probability certainly that methanogens are the source of that activity."

The chances of finding living specimens on our neighboring planet has taken a dive today, with no evidence to support finding methane producing microbes seen here on Earth. Curiosity is set to continue its mission for many years to come and, with more Martian probes launching soon from India in 2013 and Europe in 2016, the search for life on Mars continues unabated.