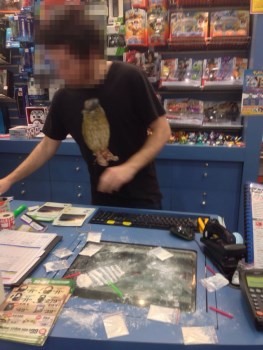 EB Games in Australia has apologized for a fake cocaine display that one of its stores set up for the Grand Theft Auto V midnight launch.

Bad behavior is par for the course in Grand Theft Auto and so I suppose that if you squint while you look at it and don't think too much, cutting up lines of fake nose candy on a store counter for a big GTA launch event sort of makes sense. It made enough sense to the staff at an EB Games outlet in Queensland, Australia that they went ahead and did it, and now, in what will surely come as a shock to absolutely no-one who doesn't work in that store, EB Games has had to put out a big ol' apology for the whole thing.

"Regrettably, one of our EB Games store locations in Queensland set up an unauthorized display within the store in support of the launch of the Grand Theft Auto V videogame," spokeswoman Debra McGrath told the Brisbane Times. "The display included a white powdery substance that appeared to be some form of an illegal drug."

Fortunately for all involved, the white powdery substance was not a half-key of finely cut Bolivian flake, but "sherbert," a type of fizzy candy, and at no point did the store attempt to give away (or, presumably, sell) the fizzy-candy-that-was-definitely-not-cocaine. "This was an isolated incident, and we apologize for any offense this may cause," McGrath said.

It's hard to imagine that anyone would think that a worthwhile coke habit is affordable on a retail wage, but even harder to believe that nobody looked at this and thought that maybe it might not be the smartest bit of marketing ever unleashed on the general public. Then again, this is Australia we're talking about, and I'm suddenly starting to think that maybe they shouldn't be allowed to play with M-rated games after all.