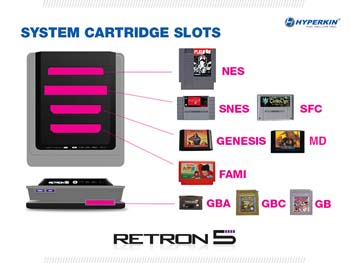 The Hyperkin RetroN 5 means nostalgia can be so much more than thinking back on how dusty your old game systems have become.

The Hyperkin RetroN 5 is a retro console that plays Famicom, Super Famicom, NES, SNES, Mega Drive, Genesis, Game Boy, Game Boy Color, and Game Boy Advance games, meaning you can put away all of those old consoles sitting around in the living room taking up space. The latest model of the RetroN series, the RetroN 5 was originally set to release on Oct. 31, but Hyperkin recently announced it will launch on Dec. 10 in the US and Europe for $100/€90.

The delay was due to a change in the shell design to increase ventilation and an accommodation for playing Master System cartridges by using the Sega Power Base Converter. The original Oct. 31 release date on Amazon was only a placeholder date. Hyperkin has contacted Amazon to change the date; however, the listing for the RetroN 5 on Amazon for preorders is no longer available.

All versions of the RetroN 5 come with an AC adapter that fits multiple regions' electrical sockets, as well as variable voltage also for ease of use in multiple countries, meaning the European release of the retro console will be available for many countries.

Many people hold on to old games because they were good games, because they're classics, or because humans in general are nostalgic creatures. Now the old games gathering dust on a shelf can receive some lost attention again.