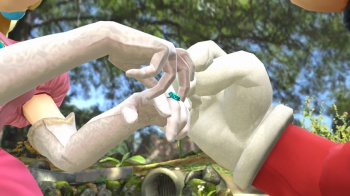 Super Smash Bros. was always based on a silly premise, specifically that Nintendo's franchises share a single universe where characters fight each other in arena-based melee combat. It was an amusing thought experiment that generated Brawl's lengthy story campaign, but at the end of the day, everyone went back to their respective universes and the status quo returned to normal. Perhaps Nintendo is reconsidering that approach with Super Smash Bros. for Wii U and 3DS, as teased with an image on the game's official website. Assuming that this isn't just director Masahiro Sakurai playing around with Smash Bros.' screen grabs (and you're no fun if you think that), then what we're clearly seeing is Mario and Peach legitimizing a 28-year relationship filled with secret romance and Koopa kidnappings.

Okay, I'm sure there's some other reason for the ring to be there. Nintendo doesn't usually stray far from its canonical formulas, at least not with the bread-and-butter Mario franchise. The ring could easily be an in-game power-up, if not a practical joke, thrown on the main page without a second thought. Sakurai also teased "Who is the ring for?" on Miiverse, suggesting that one way or another, all is not as it seems.

That being said, the more I think about this, the more I hope it's a legitimate screenshot from Smash Bros.' story campaign. Picture it: After years of delaying the inevitable, Mario and Princess Peach finally announce their engagement and send wedding invitations across Nintendo's shared universe. When Bowser, Ganon, and Nintendo's major villains aren't invited, they launch an all-out invasion on the big day to destroy their assembled adversaries in one swoop. Meanwhile Luigi, Mario's long-suffering brother and best man, takes the opportunity to confess his own feelings for Peach, prompting a sibling brawl almost 30 years in the making.

Or, you know, it's just a randomly selected daily screenshot. Why make it something more than that?