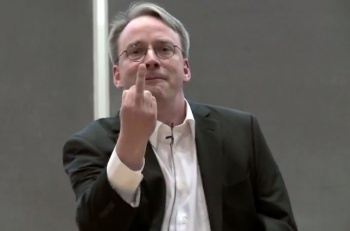 Linus Torvalds, the creator of the Linux platform, famously gave Nvidia the finger at a Q&A session last year, telling attendees that the graphics card manufacturer was the "single worst company" Linux has ever worked with. This made Nvidia very sad, and it has recently been trying its best to get back on Torvalds' good side. Its latest attempt to extend an olive branch to Linux has been with a pledge to improve its open-source drivers.

One of the things Torvalds criticized about Nvidia was the near non-existent documentation for Nouveau, an open-source driver for Nvidia cards that is built by reverse engineering Nvidia's proprietary drivers. Nvidia's Andy Ritger recently e-mailed the Nouveau developers, stating:

"Nvidia is releasing public documentation on certain aspects of our GPUs, with the intent to address areas that impact the out-of-the-box usability of Nvidia GPUs with Nouveau. We intend to provide more documentation over time, and guidance in additional areas as we are able."

The reaction from Nouveau developers has generally been positive, with several devs offering praise to Nvidia for changing its tune.

Torvalds himself responded to the news by stating: "I'm cautiously optimistic that this is a real shift in how Nvidia perceives Linux. The actual docs released so far are fairly limited, and in themselves they wouldn't be a big thing, but if Nvidia really does follow up and start opening up more, that would certainly be great."