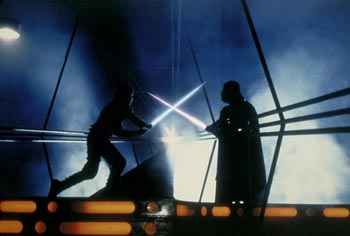 Harvard and MIT scientists played around with theories on light and created molecules that behave like a certain laser weapon in Star Wars.

Decades of science have shown if you point two laser beams at each other, nothing futuristic like a lightsaber fight from Star Wars will happen. That is, until physicists Mikhail Lukin of Harvard and Vladan Vuletic of MIT coaxed photons into binding together to create molecules.

"It's not an in-apt analogy to compare this to lightsabers," Lukin said. "When these photons interact with each other, they're pushing against and deflect each other. The physics of what's happening in these molecules is similar to what we see in the movies."

Star Wars' iconic weapon, the lightsaber, works by moving light particles in a solid mass. In the Harvard-MIT research, scientists fired two photons in a cloud of atoms, which slows the photons. In the experiment, the two photons exited together as one molecule. Lukin describes this effect as the Rydberg blockade: when an atom is excited, nearby atoms cannot be excited to the same degree. When two photons enter an atom cloud, the first proton excites the atom and slows down while the second is pushing ahead to excite atoms as well, and the two photons push and pull each other through the cloud.

"We are hopeful that new applications may emerge as we continue to investigate these photonic molecules' properties," he said.