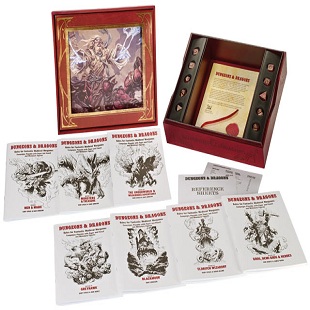 Wizards of the Coast is producing a special edition of the original Dungeons & Dragons White Box that will retail for $149.99.

If you've ever played an RPG of any variety you can generally bet that there's a bit of Dungeons & Dragons tucked into it somewhere. Whether you're talking about tabletop RPGs or videogames there's simply no way to exaggerate how important D&D has been to role-playing.

That in mind, Dungeons & Dragons is now nearing its 40th birthday and, in celebration Wizards of the Coast has produced a deluxe reprint of the original D&D first edition White Box. The premium set, which will retail for $149.99, will contain all the same content from the game's original release in 1974. This will include seven booklets detailing the game's mechanics as well as reference sheets. While they'll retain the same internal art as the original release, each booklet will come with new cover art. The set itself will come packaged in a gorgeous wooden storage case and will, of course, include a set of polyhedral dice for use in the gameplay.

We're going to put it right out and say that we want this. Granted, you can buy all the same content digitally for a fraction of what Wizard of the Coast wants for this. That being said, the deluxe edition has a really pretty box, and we're betting the nerd cred we'd get for busting this out would far supplant that of a mere PDF. In the least we can say that this reprint is a bargain when compared to trying to buy the original White Box.

Source: Wizards of the Coast via Wired