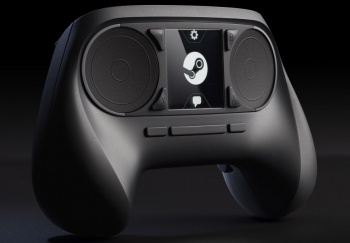 Developers who have had first-hand experience with Valve's new Steam Controller say it isn't just different for the sake of being different - it's a very clever device.

Valve officially unveiled the Steam Controller earlier today, and... well, it's different. Between the rear paddles and the high-tech trackpads in lieu of analog sticks, it's unlike any controller on the market - but as always, the big question is "Will it be any good?" The team at Valve seems to think so, but just to make sure, they invited a few developers to try the controller hands-on a few weeks ago. Now that the cat's out of the bag, those developers can share their thoughts with us.

"These are not like laptop trackpads," says Dan Tabar, developer at indie studio Data Realms. "Everyone is like, 'Oh we're replacing thumbsticks with trackpads, oh shit.' But this is not at all like a laptop trackpad. It just feels good. It's a challenge to verbally describe it." Tabar noted that he was less excited about the touchscreen in the center of the controller, but thought it had potential.

Double Fine's Chris Remo echoed Tabar's thoughts on the trackpad. He explained that the controller makes a ticking noise in addition to its tactile feedback to let users know how much they're moving on the pad, like a clicking scroll wheel on a mouse. "It sounds like there's actually a mechanical device in there," Remo says. "It just feels really high-tech and precise ... I can't stand trackpads on laptops, and this felt really good to me. There was almost no learning curve as far as accuracy goes."

There you have it - the Steam Controller's first two testimonials. If you'd rather try it out for yourself, well, you'll probably be waiting for a while. The 300 Steam users who end up beta testing Steam Machines will receive prototype controllers, but the rest of us won't see them until Valve starts rolling out its hardware in 2014.