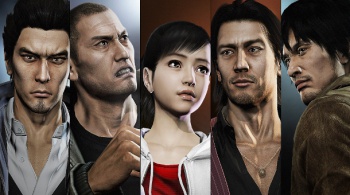 While there are no immediate plans for a Yakuza 5 localization, creator Toshihiro Nagoshi would love to see it localized "someday".

At this year's Tokyo Game Show, Yakuza spin-off Ryu Ga Gotoku: Isshin was quite possibly the most popular non-western game on display. But despite its immediate popularity, and the general popularity other Yakuza games have seen in the west, the chances of it, and the previously released Yakuza 5 getting an English localization is pretty low.

When asked if he had plans to localize Yakuza 5 for the West, series creator Toshihiro Nagoshi said, "We don't have a plan for that at the moment. The Yakuza Studio team is a fixed size, and we have to choose between forging ahead with the next game or localising the one that just came out." He said that he chose to forge ahead with Isshin rather than localize Yakuza 5, which doesn't bode well for English speaking fans of either game.

But, he didn't entirely rule out a future localization of his games, stating "I'd definitely love to reach the whole world [with Yakzua 5], haha, if we have the manpower and the money to do it."

Nagoshi was asked why he thinks there are so many western fans of the Yakuza series, to which he replied: "I think they're the kind of enthusiasts who like to experience something new. I don't think it's necessarily because they're interested in Japan; the games have such a mix of essences, even to a Japanese player, and I think it's that mix that appeals to people overseas. It's not that they like the content or the battle system or the drama; it's the mixed-up street-festival atmosphere that grabs them."

Thankfully, the PS4 doesn't have any kind of region-locking, so if you want to play Ryu Ga Gotoku: Isshin on it's release but don't live in Japan, time to hit up an import site and get yourself a phrasebook!