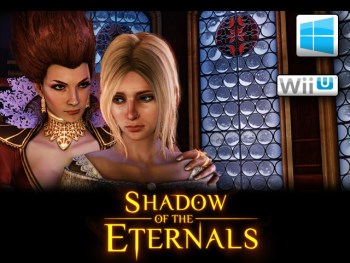 When we last left Shadows of the Eternals, it had just failed its second Kickstarter. This time, Precursor Games promised an even better game than before, complete with big-name voice actors and WiiU support, yet it only dragged in about half of its (newly lowered) funding goal. However, Precursor was adamant that it wouldn't give up on the horror game as it explored its options. Now, a month later, it has announced that it's placing the project on hold until further notice.

"It is with a heavy heart that we have decided to put the Shadow of the Eternals project on hold," Precursor Games' Chief Creative Officer Denis Dyack announced in a forum post. "For those who are not aware, we all worked on this project as a labor of love and self financed 100% of everything for over a year to try to make Shadow of the Eternals a reality. Although we did not succeed on doing this, we succeeded in making many friends and starting something that we hope provided value for those involved. We have no regrets."

It's certainly not hopeful news for those looking forward to the project, but Dyack remarks that it's not exactly the end either. "Is the project dead? No, but we feel it needs a rest too. We have all agreed as a group that when and if the time is right we will get together and start it up again."

For those just tuning into the story now, Shadow of the Eternals has had a remarkably storied existence so far. What seemed like a fairly obvious slam-dunk sequel to a classic game has instead been a circus of multiple failed crowdfunding campaigns, child pornography, and outright lack of faith in the developers. It certainly must be a discouraging experience for everyone involved, but that's the double-edged blade of crowdfunding: the crowds occasionally not want your game.

Gallery of the Day: 8 Horror Games You Should Play With the Lights Off ffronw 13 Comments