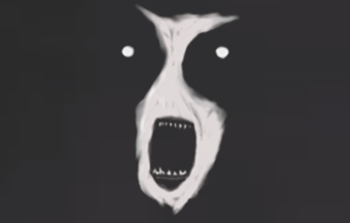 Show, don't tell; or rather, provide only the audio and let your imagination conjure your worst nightmares.

How many times have horror media built the big scary monster up in your imagination just to look laughable when it's finally shown? This time, the visuals have completely vanished in iOS game Vanished. Developer Pixel Heart created an experimental game that forces the player to wander around, relying only on a vibrating iPhone and audio.

"We think that imagination is the most powerful hardware a game needs," Pixel Heart's website states. The idea for the game came from experimenting with iPhone hardware. Pixel Heart wanted to recreate the real world movement. By using the phone's compass and accelerometer, you face the direction you want to move, and tap the touchscreen. Rotating the device like a compass simulates facing a different direction in the world of the game.

In Vanished you arrive in a pitch-black world in an amnesiac state. You can fight monsters by shaking the phone, but you'll never see the monsters. You have to navigate a world relying only on your ears.

Pixel Heart is working on an Android version, but for now the game is available on the iPhone, iPad, and iPod touch. It's available on the iTunes store for free until tomorrow when it sells for $0.99. Pixel Heart's game is simplistic in design with the potential to be a breath of chilling air in the horror genre.