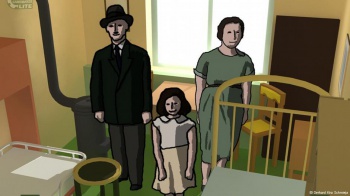 An "interactive experience" puts players in Anne Frank's shoes for one day in 1942.

What is it like to live in a 50-square-meter residence with seven other people, knowing that one noisy mistake could result in your family being sent to a concentration camp? This was Anne Frank's life for the two years her family spent in hiding during World War II, and it's now being explored in a prototype video game appropriately called Anne Frank. Created by German game developer Kira Resari, Anne Frank is an "interactive experience" that's "not really about having fun." According to Deutsche Welle, Resari created the game to preserve history and relate these events to a new generation.

Players can't change the course of history in Anne Frank; they're limited to making small choices that are supposed to give an idea of what it was like to live in that sort of confinement. It takes place over the course of one day, October 20, 1942, a few months after the Franks went into hiding. Deutsche Welle describes one gameplay situation:

Anne sits in the kitchen studying while her mother prepares lunch for the residents of the hideout, located in a rear house in Amsterdam. She asks Anne to get a bag of potatoes from the attic. But Anne has second thoughts. She feels weak and tired. Should she really go upstairs and get the bag? What if she stumbles and makes noise? Would the neighbors hear the noise and report them? If she refuses to go, will her mother be angry? They are already fighting enough as it is.

Resari traveled to the Anne Frank house in Amsterdam to research the making of this game for his bachelor thesis project. It was inspired by a professor challenging his students to create a meaningful game, with Anne Frank's story used as an example. Anne Frank is still a prototype, and Resari doesn't plan to commercially market it. Instead, he hopes it can be used as an interactive way to teach this particular piece of history.