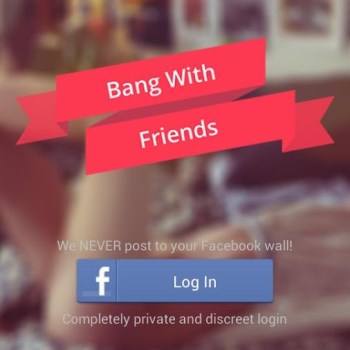 Bang With Friends, Inc. will change its corporate name and rebrand its "casual sex app".

A rose by any other name is still a hook-up app, right? Bang With Friends, an iOS and Android app for discretely finding casual sex via Facebook will be changing its name and corporate identity after settling a trademark infringement lawsuit with Zynga. The terms of the settlement are confidential, but Bang With Friends, Inc. acknowledged Zynga's "With Friends" trademark rights in an email to Bloomberg.

Zynga filed the lawsuit in July, claiming that the Bang With Friends title was chosen "with Zynga's game trademarks fully in mind." Renee Lawson, the deputy general counsel for Zynga, stated at the time that the company was "compelled to file suit to prevent further consumer confusion and protect its intellectual property rights against infringement." The social games developer has several "With Friends" titles, including Words With Friends, Gems With Friends, and Chess With Friends.

If you've never heard of Bang With Friends, don't worry, you're not alone. The app allowed you to log in with your Facebook profile and promised to never post to your wall. Once you had the app installed, you could identify those friends with which you would like to make the beast with two backs. You then wait, hoping that your friends do the same, and the app matches you up with anyone who shares your interest. Bang With Friends, Inc. already has a placeholder website up for its coming corporate rebranding. The page lets you sign up for a notification when the new app is available, if you're into that kind of thing.

Game Theory: Will 2015 be the End of YouTube Rewind? MatthewPatrick13 4 Comments
Comments on