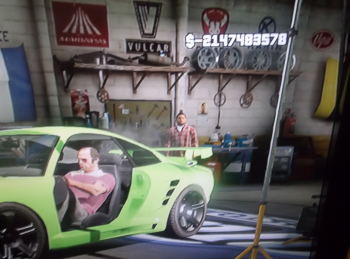 Have fun with the stock market but don't go too crazy, advises a NeoGAF poster.

It's one of the great mysteries of life: one minute you're sitting pretty with billions in your Grand Theft Auto V bank, and the next minute everything's gone negative and you're so deep in debt it'll take a lifetime to dig yourself out from under. This is what happened to NeoGAF poster OmegaDL50, when - after completing the Assassination missions and heading towards the end of the story - he dumped his $1.6 billion into Tinkle Stocks. Little did he know that the game used "a signed 32-Bit integer (i.e any value higher than 2,147,483,647 will roll over into a negative value)," but he soon found out when his accumulated fortune went up the Swanee.

Unknowing, he smashed his car. When he went to fix it, the game told him he was broke, and a few minute's investigation soon told him why. "Have fun with the stock market but don't go too crazy," is his advice to other would-be Wall Street geniuses. He's not the only one to have noticed this problem, as some French speaking gamers can attest. "I can't buy anything, even a milkshake," claims jaguarjack, who went well over the limit after the Lester missions. Again, the 32 bit integer maximum limit seems to be to blame.

So let that be a lesson to you: the penalty for greed, at least in GTA V, is insane amounts of debt. Start giving it away, spending it, make your suits out of nothing but dollar bills. Just don't try to accumulate the stuff. The bank doesn't like it.