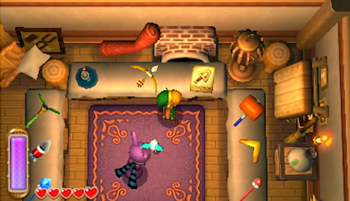 Nintendo is reconsidering the traditional new item convention in the next Zelda title, A Link Between Worlds.

Anyone who's played a Zelda game knows you toil through a dungeon, receive a new item, and then use it to solve the dungeon's puzzles. This tradition will be challenged in the next Zelda handheld game, Legend of Zelda: A Link Between Worlds. Nintendo president Satoru Iwata disclosed details on the in-game shop featuring new character Ravio, initially teased in a screenshot producer Eiji Aonuma posted in the Miiverse community board.

The majority of weapons, including the hookshot, hammer, boomerang, and many others, are available right from the beginning of the game in Ravio's shop via a rental fee. The order you take each dungeon is up to you. This departure from linearity could make some old Nintendo fans groan, but it offers a new way to take on dungeons. Hopefully there will be multiple ways to clear dungeons, allowing for more creativity in the player.

"I hope you enjoy the flexibility provided by this unique Zelda adventure," Iwata said in today's Nintendo Direct.

Both new and old characters will appear in A Link Between Worlds. Gameplay footage featured Zelda, of course, and also new characters such as Hilda and Irene, who appears to be a witch.

Iwata also addressed speculation over Ravio, who many Nintendo fans on the community board believed looks similar to the character Nabbit in New Super Mario Bros. U. Iwata said they look similar, but they have nothing to do with each other.

The Legend of Zelda: A Link Between Worlds will launch in North America on the 3DS on Nov. 22.