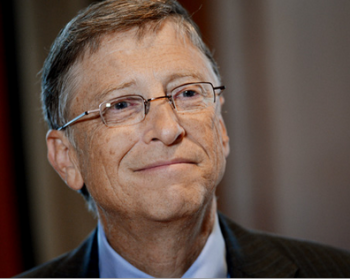 The investors hold over 5% of Microsoft stock.

Three among the top 20 investors in Microsoft are alleged to be pressing Bill Gates to leave his position as Chairman, after the departure of Steve Ballmer, Microsoft's former CEO and employee #30. These investors, who jointly hold over 5% of Microsoft's stock, are clinging to anonymity, according to Reuters, as the discussions are being held behind closed doors. Gates holds 4.5% of Microsoft's stock, the largest shareholding owned by an individual. The three pushing for Gates to go are concerned that Gates wields a power out of all proportion to his actual standing in the company - Gates is far more focused on his philanthropy these days than the company he co-founded - and worry that Gates will interfere in the selection of Ballmer's successor, or even the policies that Ballmer's successor follows.

Though Gates' is the largest individual shareholding, that may change. Under a set program, Gates automatically sells 80 million Microsoft shares each year. At that rate, he will have sold his entire holding within the next five years. Reaction to the news has been mixed. While some analysts view Gates' possible departure as a breath of fresh air - Microsoft's stock price has been stagnant for years, one of the reasons why Ballmer had to go - others hope that Gates will step up and become the technology visionary Microsoft so desperately needs. But that assumes that the man who stepped down from day to day operations in 2006, and who's more concerned these days with the Gates Foundation, still has what it takes to be a technology visionary.

One thing worth noting is that Ballmer's strategy, before he left the company, was to focus on making devices, like Surface and the Xbox, and turning key software into services provided via the internet. Some investors have argued that a new CEO should not be bound by that strategy, and if these are those same investors pushing for Gates' departure - and they get it - then perhaps, just perhaps, the day's not long off when Microsoft isn't a device maker any more. It's not as if the idea of selling Xbox hasn't been raised before, and Xbox One's debut this November could be rocky. We shall see.