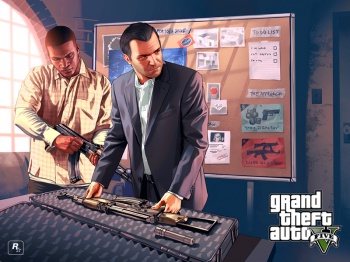 Rockstar's Grand Theft Auto V took half of boxed sales in September in the UK, bringing sales up since Dec. 2008.

Brick-and-mortar stores have suffered with the spread of online shopping and downloads of games, but Rockstar's Grand Theft Auto V appears to be revitalizing the sale of boxed games. The game retail sector did not record an increase in sales for many years except for a peak in Dec. 2008. Since then, annual sales have steadily declined for an unprecedented 59 months, CVG reports.

GTA V has sold over 2.6 million copies in the UK. The game hit it big within a couple days, selling $1 billion total in three days.

Even though there was a peak in sales last month, retail stores will likely resume declines later with some success late November and December for the holidays, especially with the launch of the PS4 and Xbox One. When PlayStation America CEO Jack Tretton was asked about the state f the US games retail sector last month, he compared the PS3 to the re-runs of a show. "You might say, boy, the re-runs of a show we released seven years ago aren't doing as well as before."