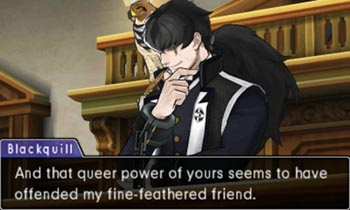 Localization involves balancing faithfulness to the original while making the content something a different audience will be able to understand. Capcom wrote a blog post explaining their process for localizing the next Ace Attorney game, Dual Destinies, with special attention for two new characters, defense attorney Athena Cykes and her childhood friend, the new prosecutor Simon Blackquill.

Translators brainstorm many different names before finding one they choose. As to be expected for any quirky Ace Attorney game, Capcom hinted that they love names with puns behind them. Athena is a new defense attorney working with Phoenix Wright. Capcom chose the name "Athena" because it wanted to continue the tradition of naming protagonists after mythical creatures or powerful gods. Athena has a crescent-themed motif, Capcom chose to spell her last name with a "C" instead of an "S." Using an "S" would also make her name look too similar to forensic detective Ema Skye's last name.

Simon Blackquill serves as a prosecutor in Dual Destinies and was designed with Victorian sensibilities in mind. His last name comes from his black coat, featuring the design of a black and white feather, leading the localization team to combine the color of his coat and the feather motif into "Blackquill."

"Simon's name is meant to sound like a Victorian villain to match his manner of speech and overall character in the localized version," Capcom stated. Simon's design in Japanese draws on history and culture, and the team wanted to retain "as much of the original dev team's intent as possible, but it is hopefully more familiar to us Westerners." Simon speaks in an old-fashioned style of speech, using many sword metaphors and analogies. The team is confident the context for the Victorian Simon Blackquill is faithful to the original Japanese depiction as a "Meiji Restoration-era fighter."

"That's the wonderful thing about localization," Capcom wrote, "You don't have to stick to the original cultural shorthand as its understood by the Japanese audience since you, well...can't without providing 10 pages of background notes, but you can preserve so much through word choice." Dual Destinies will launch Oct. 24 for the 3DS.