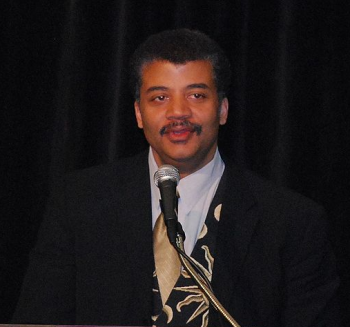 Mysteries of #Gravity: Why we enjoy a SciFi film set in make-believe space more than we enjoy actual people set in real space.

Neil deGrasse Tyson enjoyed Gravity very much, but as an award winning astrophysicist he found one or two things to beef about. Twitter being the best place by far to air grievances, he kicked off a series of Mysteries of #Gravity messages, taking aim at everything from zero gravity to Sandra Bullock's hair. Some of it's the kind of thing you'd expect an expert to notice, but the others ... well, take a look, and wonder (spoilers ahoy!):

Why Bullock's hair, in otherwise convincing zero-G scenes, did not float freely on her head.

When Clooney releases Bullock's tether, he drifts away. In zero-G a single tug brings them together.

Why Bullock, a medical Doctor, is servicing the Hubble Space Telescope.

None of which means he didn't have fun watching the movie, but if anyone is ever going to stand still and be quiet when science is at stake, it's probably not going to be him. "That was three-weeks-worth of Tweets in one evening. Sorry to overload your Twitter streams," deGrasse Tyson concludes. "Good night universe."