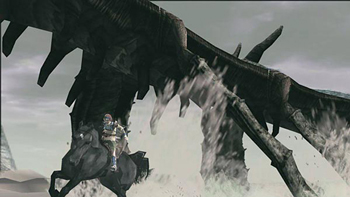 Starting today PlayStation Plus members receive discounts on games like Shadow of the Colussus, Crash Bandicoot, and Spyro the Dragon.

In an update to the PlayStation store today, Sony has added several discounts to fan favorite games, including a free download of Shadow of the Colossus for the PS3. You must be a PlayStation Plus member to take advantage of the discounts.

Shadow of the Colossus came to the PS2 in 2005 - with an HD release for the PS3 years later. Armed with a sword and a bow, you aim to take down the colossi and resurrect a girl named Mono. Desaturated colors and darkness set up the atmosphere of a forbidden land for the hero's lonely journey. The game also has few enemy encounters, limiting it to 16 colossi, but each presents a unique challenge. Shadow of the Colossus is a part of the Instant Game Collection and will be joined by Hotline Miami and Kingdoms of Amalur. When asked about Hotline Miami, Kristine Steimer from the PlayStation blog hinted it would get its time in the collection later this month.

There's also a sale on many Activision titles. Crash Bandicoot, Crash Bandicoot 2, and Crash Bandicoot 3: Warped are each $2.99, as are Spyro: Year of the Dragon, Spyro: The Dragon, and Spyro: Ripto's Rage! However, those discounts all end on Oct. 15, so mark it on a calendar. Also leaving on the 15th from the Instant Game Collection is Saints Row: The Third.

If you're already a member and haven't checked out some of those games, it will be worth your time to try them out.