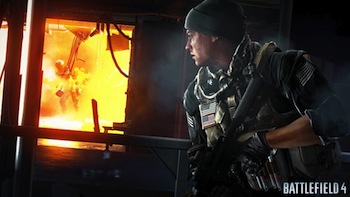 "We got a lot of feedback from the Battlefield 3 singleplayer, and based on what we intended to deliver the team did a great job," says DICE's Lars Gustavsson, "but given that it's a Battlefield product there were a lot of expectations that it would be more open." DICE's single player really didn't work that well last time, particularly when compared to the strength of its multiplayer, but DICE has learnt its lesson, Gustavsson claims. DICE wants to infuse the single player campaign with multiplayer elements; that's the way to beat the single player issues.

"The future will tell, but where we come from we do single player because we want to and we've learned a lot while doing it," says Gustavsson, "and I think we have a great story to tell." You'll be able to command your squad in single player, giving you some tactical options. But the bigger issue, DICE feels, is encounters, which need to be more open. In the previous Battlefield your tactical options were limited to 'pick up this and do that' which, Gustavsson admits, isn't the most exciting way to get things done. Opening up the encounter system, providing you with more choice as to how to tackle any given encounter, should do a lot to spice up the single player campaign.

"Players want to feel smart doing what they're doing," says Gustavsson, and DICE hopes that crossbreeding its single player campaign with multiplayer elements will do just that. This FPS is due on PC, PS3 and Xbox 360 October 29th; slightly later, for next generation consoles.