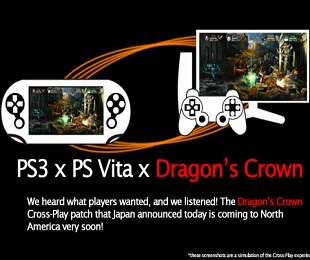 Atlus and Vanillaware are adding Cross-Play to Dragon's Crown and are offering gamers a $10 discount until October 15th.

Dragon's Crown is arguably one of the more unique games to come out this year. A hand drawn hybrid of RPGs and sidescrolling brawlers, it impressed many with its gorgeous visuals and deceptively deep gameplay. Released on both the PS3 and Vita, it enjoyed strong multiplayer components that, sadly, didn't cross platforms. Now, Atlus has announced that it will soon be releasing a patch that will add Cross-Play functionality to bridge the gap between handhelds and consoles.

"Since launch, we've been hearing from our fans how much they wanted Cross-Play in Dragon's Crown," said Atlus. "Vanillaware was focused on delivering the best game possible, so we couldn't include it at launch, but we've been supporting the title ever since! Now, we're stoked to tell you that Cross-Play is on its way." Initially announced for Japan, Atlus confirmed that gamers in North America will also be privy to the patch.

As if that weren't enough, Atlus also recently announced that it would be discounting Dragon's Crown on both the PS3 and Vita. Until October 15th, the game will be 10 cheaper both at retail and digitally on the PlayStation Network. This will drop the game's price down to $39.99 on PS3 and a $29.99 on Vita. In other words, if you still haven't picked up Dragon's Crown Atlus has arguably delivered some mighty fine incentives to get in on the game.