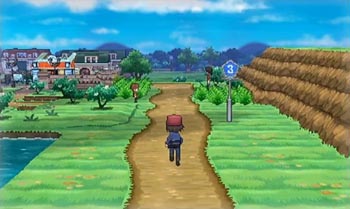 X and Y represent the people around the world who intersect in a cultural meeting point.

Pokemon X and Y are the first games in the series to deviate from the color themes of previous games. When the announcement of X and Y came in January, there was a chorus of "Huh?"s regarding the titles. In the most recent Iwata Asks, Game Freak Director Junichi Masuda and Pokemon Company President Tsunekazu Ishihara explained the reason behind the titles for X and Y as representation of people around the world intersecting at different points. Should we expect a Pokemon Z to represent all three dimensions?

"So the theme this time is that even if languages, cultures, and mindsets are different, even if the surrounding environment is different, they overlap somewhere," Iwata said.

"The world holds people with all sorts of ways of thinking, and you can get a sense that they exist in different dimensions," Masuda said. "But if you think of them as people who think on the x-axis and people who think on the y-axis... then they intersect somewhere... We may think differently, but we all live on the same planet, so everyone eats, sleeps, and goes about their business day after day just like everyone else." Masuda added that the pronunciation of letters changes in each language, and this was a good representation of different people around the world coming together.

"Because they're the first main Pokemon games for a new hardware platform... I wanted to do something completely different," Ishihara concluded, "so I thought the titles were perfect."