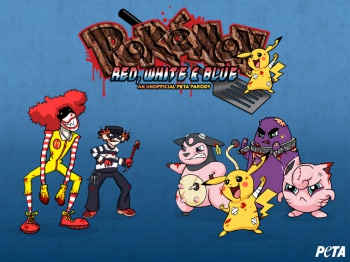 PETA has another Pokemon-themed parody game, this time featuring Pikachu and friends going up against the evils of McDonalds.

You wouldn't expect PETA to have much in the way of a game development department, but you'd be surprised. After People for the Ethical Treatment of Animals released Pokemon: Black and Blue last year, the animal rights group has created a sequel (of sorts) with a new parody game, Pokemon: Red, White, & Blue. The browser game lets you rescue tortured Pokemon from animal abusers like McDonalds workers and customers, and urges players to "choose kindness and go vegan - after all, even humans can evolve."

The core protest here is against Nintendo using its iconic mascots (via Happy Meal toys) to endorse McDonalds' abuse of animals. Heavy-handed though the writing may be - somebody swoons every single time PETA is mentioned in the dialogue - the gameplay gets its message across while staying surprisingly true to the Pokemon battle formula. Of course, you'll only be battling human enemies: the game isn't afraid to point fingers at the Pokemon series for desensitizing children to animal violence.

"Our parody game is a fun way to tackle a serious issue - that it's wrong for Nintendo to allow McDonald's to lure kids in using its beloved, cute icons, when the reality is that Pokemon have been used to mask would horrify them" says PETA's Joel Bartlett. You can play the parody game on PETA's website. It only takes a few minutes to complete, but it certainly doesn't waste time delivering its message.