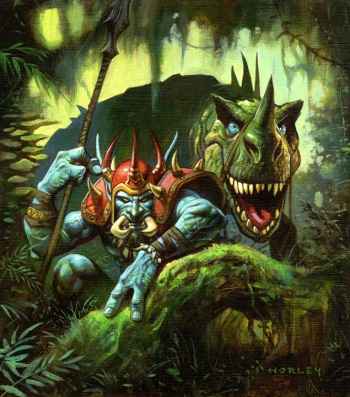 Blizzard is putting its new online CCG Hearthstone: Heroes of Warcraft through its paces with an invitational tournament at BlizzCon in November. The tournament, dubbed The Innkeeper's Invitational, will have eight players compete for the title of "Grandmaster of the Hearth" and a "fitting trophy for their impressive efforts," says Blizzard. Each match will be a best-of-five playoff, and each player must bring three decks to the competition, each a different class. If a deck is defeated, it is removed from play. If a player runs out of decks, they are out of the tournament. This format could encourage some interesting strategies for the tournament overall, influencing whether players choose to reserve their strongest deck or put it out first. The tournament will be played live at BlizzCon and a live stream of the event will be available.

Here are the tournament brackets:

The eight players invited to the tournament are all heavily involved in streaming games. Day[9] is a top rated StarCraft II player and eSports personality. Hafu and Reckful are former professional World of Warcraft players who have both played Hearthstone on their streams. Noxious, Trump, and Kripparrian stream games and produce YouTube videos about the games they play, like Hearthstone and Diablo III. Artosis and Husky are professional StarCraft II commentators who have both produced content related to Hearthstone.

Hearthstone: Heroes of Warcraft is currently in closed beta. Decks in the CCG are built around one of nine classes from World of Warcraft. Players duel 1v1 with premade decks, or compete in the Arena by building 30-card decks from a restricted selection and then dueling with that deck until losing three games or winning nine. The amount of mana you have to cast spells and summon creatures increments each turn, removing the need for land cards. You can apply for the beta test by opting-in with a Battle.net account. Hearthstone will be available first for Windows and Mac, with a later version for iPad. Blizzard has not yet announced a release date for Hearthstone. If, like me, you are gazing mournfully at your inbox looking for a beta key, you may find it soothing to watch some streams of The Escapist staff playing Hearthstone.