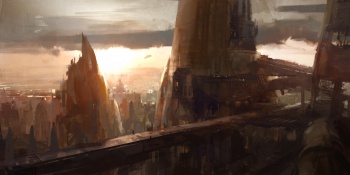 At NYCC 2013, I got a chance to speak to CCP's Torfi Frans Olafsson, who has been working on EVE since 1999. With 14 years of EVE under his belt, there are few people out there who can talk about the game quite so passionately. As Creative Director - EVE Universe IP Development, he is responsible for bringing the entirety of the EVE universe to a variety of new media. The most fascinating of these adaptations, at least from where I stand, is the new Dark Horse Comics cooperative endeavor, EVE: True Stories, which is slated for a four part release starting in February 2014.

If you haven't heard of True Stories, the basic premise is that no NPC in the EVE universe can come close to comparing to the fame and infamy of the players in game. Olafsson made it clear that the players in game are the "rockstars" of the universe, so it is only reasonable to make them the center of their graphic novel collaboration. To that end, CCP created a website where players could submit their in-game stories, told from the players' own perspective, and they chose what will likely be the most powerful and controversial story: The appearance of GoonSwarm and its role in the downfall of Band of Brothers. "We are only the messengers," said Olafsson of CCP, further solidifying the idea that players, not NPCs, are truly at the center of the EVE universe.

A little backstory: Band of Brothers was the dominant alliance in the EVE universe for some time. At the height of their power, however, Something Awful entered the picture, with their upstart alliance, GoonSwarm. If you've ever encountered a Something Awful guild in an MMO of any sort, you probably have some interesting stories to tell. Whether you praise them or condemn them for their often controversial behavior, it is undeniable that they always bring something novel to the table. In this case, the leader of GoonSwarm convinced a Lieutenant from Band of Brothers to defect. With the Lieutenant working to bring down Band of Brothers from the inside, GoonSwarm created its own lasting place in the EVE universe.

GoonSwarm's leader actually submitted the story to True Stories, so the series will be told largely from his perspective. Olafsson is expecting a lot of blowback, given the controversial nature of the story, but CCP thinks that it will be well worth it, just to bring one of the most epic tales of subterfuge from the EVE universe to a wider audience through a new medium.

Another particularly compelling aspect of the True Stories series is that they have a different artist for each of the four parts, so you'll be getting a new perspective of the universe with every issue. EVE rigorously adheres to the art direction in the game, and Olafsson was visibly excited to get to see a handful of new artists taking the ships, races, and universe in their own creative direction.

EVE: True Stories will be showing you the rise of GoonSwarm and the downfall of Band of Brothers starting in February 2014, and will be available for free online. The second and third issues will be released in March, and the final issue will launch in April. If you really dig it, you'll even be able to get all four issues in print form later in 2014 as a compendium of sorts. If things go well, this won't be the end of True Stories, as they received hundreds of entries from players, and are eager to share more of the stories of EVE's rockstars with a wider comic-reading audience. There has even been talk of an EVE television show down the road sometime. Details were scant, but keep an eye out for more info on that in the coming months.

If you want to know more about EVE: True Stories or the disbanding of Band of Brothers, you can check out the True Stories website.