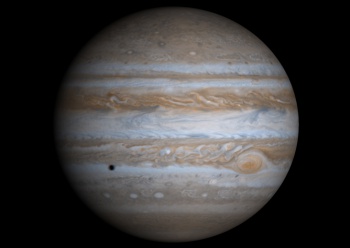 Some US scientists now claim that diamonds the size of hail may be raining down to the cores of Jupiter and Saturn.

As anyone shopping around for that special someone will know, jewelry stores can often charge an arm, a leg and half a kidney for a high quality diamond ring. This is due to the rarity of naturally occurring diamonds on the surface of planet Earth. Now, a team of US scientists conclude that new atmospheric research shows these precious rocks exist in abundance on Jupiter and Saturn, raining down deep into their cores.

This is not the first time gemstones have been thought to exist on other planets, Uranus and Neptune have already been predicted to be home to solid diamonds, but Saturn and Jupiter were thought to have unsuitable atmospheres. In this new research, storm systems on the gas giants were observed to have lightning turning methane into soot high in the upper atmosphere of the planet. The soot then falls under gravity further into the gas giant and starts to experience higher temperatures and pressures. At a depth of 1,000 miles the soot turns into graphite, the sheet-like solid state of carbon. At 3,700 miles, these chunks of falling graphite get compressed even further into the harder, unreactive solid state of carbon, diamond. The biggest diamonds formed would be around one centimeter in diameter - "big enough to put on a ring, although of course they would be uncut," said Dr. Kevin Baines, of the University of Wisconsin-Madison and NASA's Jet Propulsion Laboratory when presenting to the annual meeting of the Division for Planetary Sciences.

Dr. Baines has a lot of faith in his team's findings despite the skepticism: "The bottom line is that 1,000 tonnes of diamonds a year are being created on Saturn. People ask me - how can you really tell? Because there's no way you can go and observe it. It all boils down to the chemistry. And we think we're pretty certain." But the diamonds don't stop there, they continue falling for another 18,600 miles (roughly two and a half times the Earth's diameter) where it is uncertain what happens to them. "Once you get down to those extreme depths, the pressure and temperature is so hellish, there's no way the diamonds could remain solid. It's very uncertain what happens to carbon down there." Baines concludes, noting that one possibility is that a "sea" of liquid carbon could form. "Diamonds aren't forever on Saturn and Jupiter. But they are on Uranus and Neptune, which are colder at their cores."

His results are yet to be verified but many other planetary experts have spoken up in support, saying the possibility of diamond rain "cannot be dismissed." Either way, it seems we may have found a new reason to venture out to the other planets in our solar system, if only to bring some more bling back to Planet Earth.